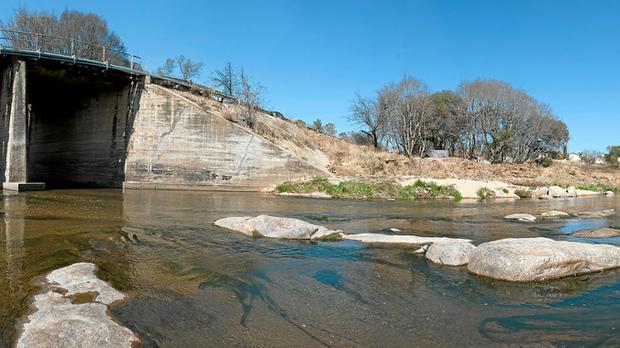 My idea to walk Johannesburg’s infamously polluted Jukskei River sank almost as soon as I decided to do something about it. When you become determined to walk the length of a river there’s really only one decision left to make, and that’s where to start.
For pointers I had just read Peter Ackroyd’s vast 2007 tome Thames: Sacred River, in which he announces that “the journey towards the source is the journey backwards, away from human history”, and although that sounded like a valid advisory the opposite, of course, is true in the case of the Jukskei.
The source of the Jukskei is more or less in the centre of Johannesburg, and it runs out for about 50km to join the Crocodile River just beyond the city’s northern reaches.
This radial neatness in a city in which so little is straight, planned or makes immediate sense suggested to me that it hardly mattered in which direction I travelled – whatever the walk was going to unlock would be unlocked equally either way, and as much on the east bank as the west.
But in the end the thought of the Johannesburg skyline looming before me always as I trudged, like a giant Guy Tillim print I wouldn’t be able to take down, was completely unacceptable.
So I took a room for a month in the Troyeville Hotel, across the valley from Doornfontein, the suburb in which the Jukskei is said to rise.
Almost immediately I faced some far more daunting obstacles.
Money had briefly returned to the once luxurious suburbs around Ellis Park ahead of the 2010 football World Cup and the hotel, for years the dingy last outpost of old-town intellectuals, had suddenly found itself a safely edgy venue for company Christmas parties and low-profile book launches.
In my first week there Tim Butcher turned up, fresh from a 500km tramp through the jungles of Sierra Leone, about which he had written a book.
His previous effort was Blood River: A Journey to Africa’s Broken Heart, an account of his trek down the Congo River.
As the anecdotes about murderous militias and man-eating crocodiles mounted, the Jukskei started to seem like small beer.
I had, furthermore, failed to locate the river’s eye. The maps I had to hand indicated the Jukskei started either at Bruma Lake or a little to the south of it, at the bottom of Bezuidenhout Park, several kilometres short of Doornfontein.
Searching for the eye
When I visited the Johannesburg City Library in search of clearer orientation, I had found the doors barred and a notice declaring a year of renovations. The city seemed reluctant to give up even the most basic facts about itself and so I killed the project, lived out my month in the hotel and moved to Cape Town.
Two years later, I was back. The books in the Africana section of the Johannesburg library were still in boxes but a benevolent librarian indicated I was welcome to take pot luck and led me to the box that, she felt certain, contained the literature on Johannesburg.
That morning produced some promising co-ordinates. The first clues came from GR Allen’s 1994 thesis on the subdivision of the Witwatersrand farm of Doornfontein, or Doren Vontijn, which contained a copy of a report submitted in 1853 by the farm inspection commission of the Transvaal Volksraad. This confirmed that the farm was “served by one spring”, which was located near its northern border. In 1861 ownership of Doornfontein passed to Frederik J Bezuidenhout, who sold the northern portion to his son, Frederik Bezuidenhout Jr, who in turn, in 1891, sold 45ha of his farm to the Johannesburg Waterworks Exploration and Estate Company. Company chief James Sivewright hoped the 18 000 litres-an-hour flow rate of the spring arising on this portion of Doornfontein would be sufficient to supply the exploding city with water, and ordered that a waterworks be established next to it, “halfway up what is today Sivewright Avenue”.
I took a taxi directly there and found plenty of sewage running down the road’s mid-section and into a drain eyelid, but nothing to suggest the presence of an artesian spring. Wendy Bodman, the ardent water- quality activist who in 1981 penned an invaluable booklet called The North Flowing Rivers of the Central Witwatersrand, perhaps experienced something similarly discouraging, for she declared the eye of the Jukskei “irrevocably lost beneath the development around Ellis Park”.
Feeling stumped, I called water heroine Mariette Liefferink, Johannesburg’s very own Erin Brokovich, who put me in touch with the equally outspoken Paul Fairall, chairperson of the Jukskei River Catchment Forum, who said he believed that the source of the Jukskei lies under the Standard Bank Arena in Bertrams. 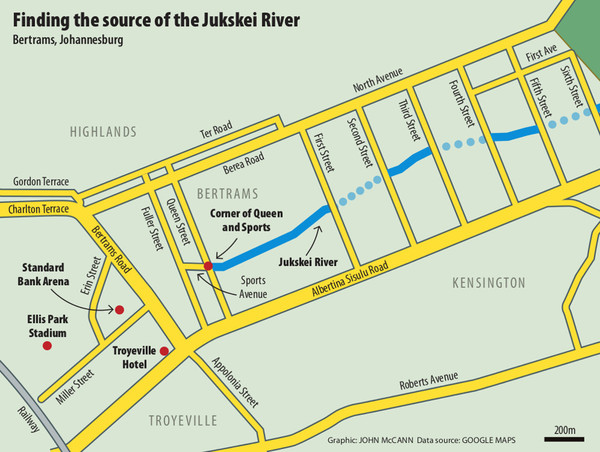 The next morning I was outside the tennis courts of the Gauteng Central Tennis Association at 7am to meet Phillip Siyeti, the arena’s caretaker. When Siyeti arrived he recounted how, when the facility was being developed in 1986, the builders “pumped and pumped” but could never get the water clear; they would come back the next morning and it would be waist-deep again. We were standing in the gloom of the internal walkway, staring into a deep water-filled well out of which snorkelled a series of pipes.
“I listen to the tiles every day,” said Siyeti, of the tiled concrete slabs that cover the arena’s two wells. “If I hear the pumps have stopped I know this place will be a swimming pool in one day.” But Siyeti was also convinced that, pre-development, the Jukskei would already have been flowing by the time it reached this point.
“The water comes from the direction of the Ellis Park swimming pool, which is nearby, a little way up the hill. That is the start, I think.”
A day or two passed in which it seemed as though I was rattling around in the brain of an amnesiac. 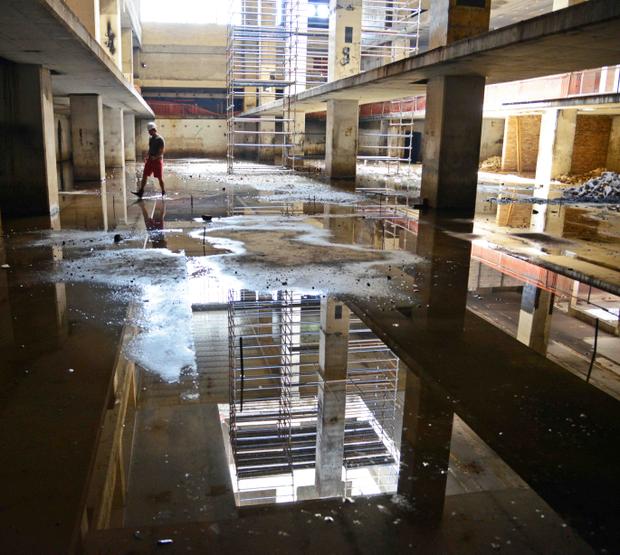 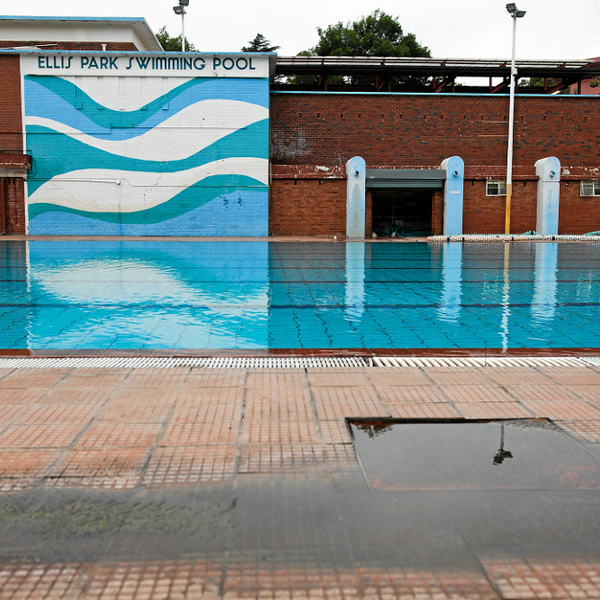 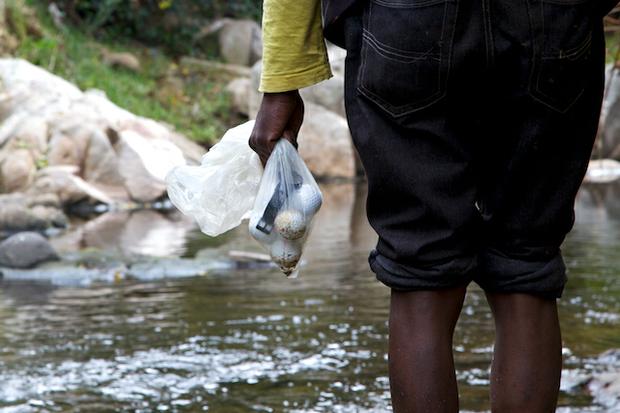 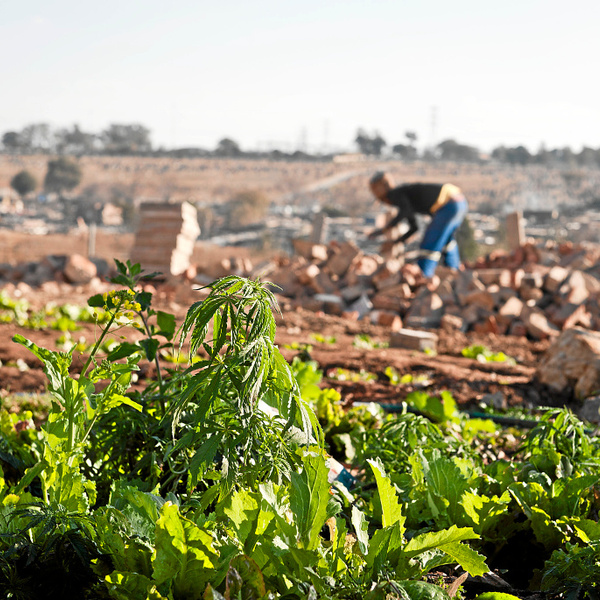